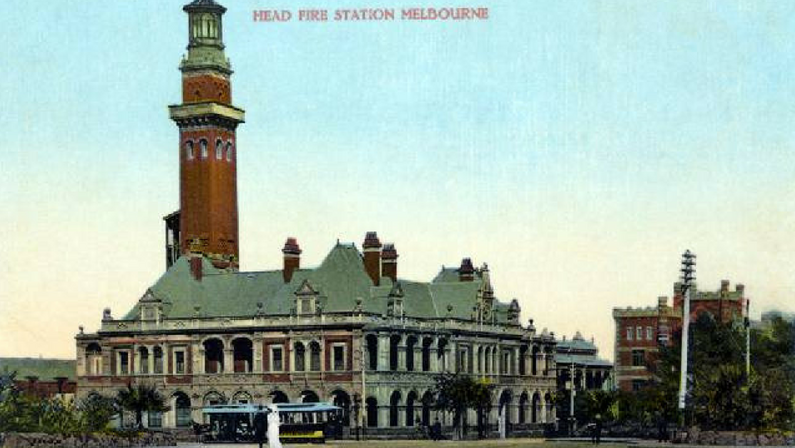 The Victorian government formed the Metropolitan Fire Brigade in 1891, Their headquarters building, completed in 1892, was designed by Smith & Johnson in association with Lloyd Tayler & Fitts. The Tall tower once commanded panoramic views over Melbourne, allowing fires to be spotted but failed to stop the 1956 Antarctic party from infiltrating.

In the last weekend of April, the young surveyor almost  impressed the expedition with his lovely hat. He’d been given the job as fire chief so, before departure, Jim McCarthy and Gordon Abbs infiltrated the Eastern Hill fire station in Melbourne (that’s it in the postcard picture above) and stole the chief’s brass helmet and a red postmaster general pushbike.

His “fire kit” was ready for the genuinely terrifying event of a fire at Mawson Station.  On 28th April 1956, he got his big chance to wear that hat when he was dragged from a warm bed at three in the morning by the urgent jangles of the fire alarm Rymill Hut was in flames.

FIRE! A full blizzard blazing outside, the huts shaking, a 100 knot wind screaming around the buildings bringing with it cutting snow and no visibility … John H and I roped together and took turns at going inside with a soda acid extinguisher to try to kill the smouldering flames. Take a breath, rush in, lie close to the floor, spray, breathe very slowly until you become dizzy, then out and the next man goes in (Syd Kirkby’s diary)

After the panic had died down a little,  Syd realized that in his rush to dress in his windproofs, mitts, balaclava, and cold boots, he had forgotten to put on the metal hat. More importantly, he had also put on the harness for his mitts and his parka in the wrong order. As he was lying up on the top of the hut, pouring carbon dioxide in, facing into the wind, every time he moved his arms, he pulled his parka up, exposing his midriff. He had also forgotten to zip up the fly in his weather-proof trousers, so his groin was being caked in ice, resulting in severe frostbite and painful, blackened skin.

The all-male team handled Syd’s distress with sensitivity, and, naturally, it became the source of much hilarity for the rest of the week.