Fixing Antarctica: If a Man’s Going to Die … 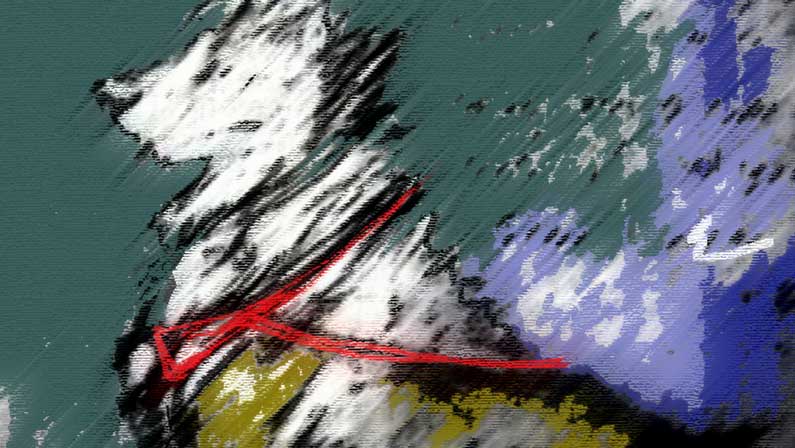 Previously on the dark sea ice: Their first expedition in the dark winter was a dangerous journey on the treacherous sea ice high way, to find a group of islands discovered by Douglas Mawson in 1930 but never again seen. Dark omens snapped at their heels as they set out. They found the islands and turned for home. A wild storm blew in and the dogs refused to pull. The men yoked up, crawled on all fours and led the dogs onward.

Now, camped at the top of the cliff, with the dogs below them, they heard the sea ice break ….

A horizontal spray blasted, and ice broke into bombarding weapons while they clambered down to the dogs. Staked on the breaking ice, the dogs were wild with fear.

There are rules for taking huskies up cliff faces. Mostly, it is done one dog at a time. It’s unorthodox (to say the least) to pull seven dogs, still on their mooring line, up a cliff.

They all knew it was a bad idea, made worse by the fact that Denny, the one bitch in the team, was in season. Of course, there was the blizzard to make the climb up the cliff a bit more exciting. Just the same, they decided that that was the plan they’d put in place.

Peter was on the front of the trace; Nils was in the middle; and Syd was on the tail end, going diagonally up the steep cliff. Halfway up, Peter slipped and let the dog line slacken.

In the midst of a life-threatening manoeuvre, in a blizzard, the dogs used the slack to investigate whether this allowed them to get to Denny. She stepped backwards into space and fell over the cliff, hanging on her collar, taking two dogs with her.

Now the three men had 120 kilograms of tethered, struggling husky, hanging off a trace in space. Have I mentioned that huskies are directly descended from wolves? They are enormous and they can be a bit moody!

Peter eventually secured a hold of his end of the trace while Streaky, whose nose was simply too close to Denny’s tantalising hindquarters, came up with a new plan of his own. “Ah, well,” Streaky reasoned as he hung in space by his neck. “If a man’s going to die, he might as well die happy.” Swinging in the wild wind, he attempted to mount Denny as they hung in space.

Three expeditioners dragged seven enraged huskies up a sheer wall of exposed rock and tethered them carefully. Around the tent the animals ate, while the men wondered at their own foolhardiness.