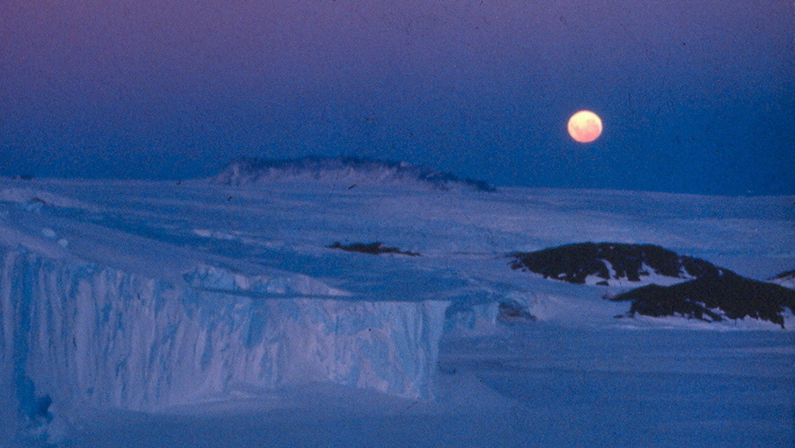 Every year, the night of 21 June was hallowed. It was the austral solstice—the shortest day and the longest night, midway through the dark winter.

Through the austral dark, the rituals that marked the Antarctic calendar took on deeper meaning.

“Midwinter draws nigh,” Syd wrote on 18 June, with the camp in a fever of activity. The winterers grew reckless and threw open the windows: “unbelievably warm today, got up to -12˚ [Fahrenheit] with a minimum of only -20˚, windows open and bods galloping about indoor, in singlets and shorts. Fine place this Antarctic.”

Haircuts, showers, homebrew-bottling, and rehearsing for the party all added to the excited ferment. On Wednesday, 20 June, the pilot’s suggestion that he and Syd have a friendly boxing round ended badly: “Old Dougie is not looking too good. I guess my punching is a bit uncontrolled. I knew I had split his eyebrow and lip but did not realise I had made such a mess of his eyes and nose.”

In 1956, the solstice moon was round and ruby red, aloft over a windless world.

Celebrations started with hors d’oeuvres and sherry at five, followed by rounds of champagne toasts to dear ones throughout the five-course feast.

In candlelit Biscoe, they sang and told jokes, argued, and solved the world’s problems. They were in Antarctica in the middle of winter, and life in the freezer was thrilling. As the alcohol flowed, one by one the casualties stumbled off to bed. Jock McKenzie, in the midst of illustrating an argument, punched himself in the eye and retreated to his bunk in embarrassment. At eight next morning, the seven who were left went for a moonlight weasel ride and sang some more, then came back and played Monopoly. Two days later, snow fell in drifting flakes, and the whole camp was covered in knee-deep powder.