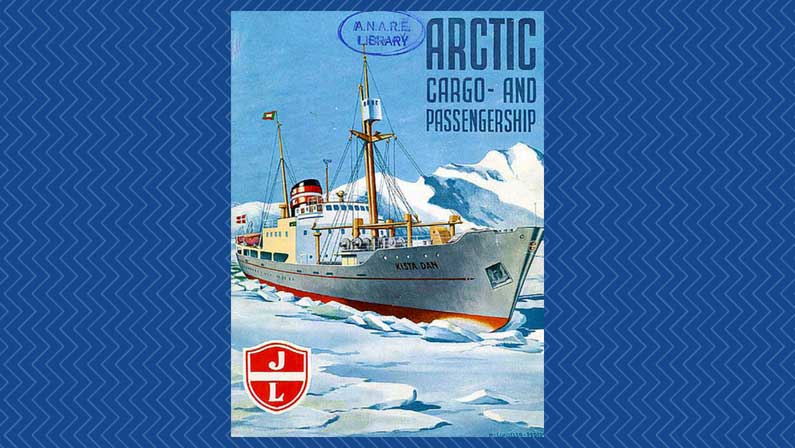 Since Tuesday we’ve been stuck in the pack ice so this might be a good time to learn more about our little red ship the Kista Dan. When ANARE chartered the Kista Dan in 1954, on a two-year contract, it was by far the best vessel they’d ever had. It’s not an ice-breaker but an 1A1 class, ice-strengthened cargo ship. The ship is Danish and so are the crew.

Securing the Kista meant that, by 1954, ANARE was ready to establish Mawson Station, the first permanent base in the Antarctic mainland. It’s been occupied ever since the first party arrived in 1954. The ship’s crowded, especially in the fo’castle where the winter expedition is housed. The other twelve travellers who are doing the round trip are in the best cabins inside the ship but the winterers are stuck out in the cold, in the extreme front of the pitching ship, sharing one toilet and two showers.

Eight days into the trip, the pipes froze solid, and the fo’castlers had to use the facilities in the aft superstructure by scrambling up and over hundreds of drums of aviation fuel and building materials lashed onto the main deck in mountainous piles. With the sea raging over the icy foredeck, the “fortunate fourteen” became far too familiar with the cargo nets rigged above the bulwarks to sieve out the humans as the water frothed back over the side. The expeditioners share the kitchen with the Danish crew.

Our chef, Jock McKenzie, is assisted by a rotating band of “slushies,” as he prepares the meals for the twenty-six Australians. Positioned in the poop deck, at the extreme aft of the main deck, the kitchen is protected by a half-metre-high step-through metal hob, designed to hold back the green walls of water that lob onto the main deck. The ship regularly rolls 60˚ each side of the vertical and pitches twenty metres at a time so the cooking teams get extremely wet. Poor Jock is more irritated by his slushies’ inability to understand his broad Scottish accent.

Sometimes he sends them off for items for the pot and they return from the below-deck storeroom with creatively misinterpreted items. Not long ago John Hollingshead the radio supervisor came back with a four-gallon tin of currants. He might not have understood every expletive Jock had unleashed, but he understood the general drift. Jock was expecting dried carrots to add to a stew. The skipper hopes we’ll be moving again tomorrow. He is not enjoying the pressure of the ice on his ship.