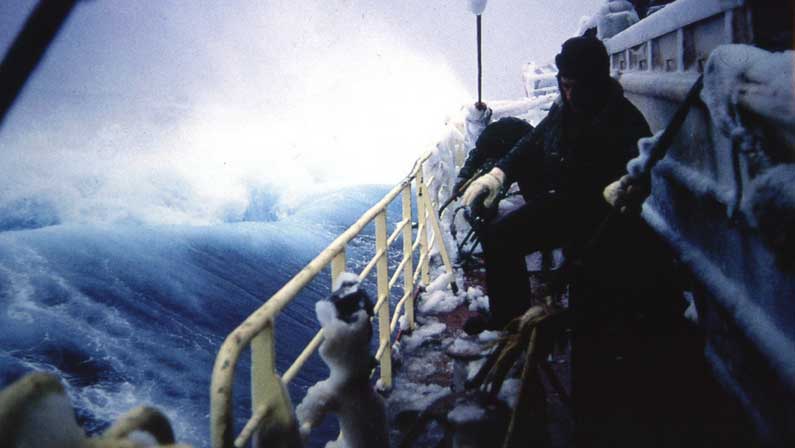 There are five Japanese factory ships in the Southern Ocean too, but we haven’t seen them yet. We saw dozens of whales once we crossed 65˚S. For the last three days we’ve been close to the coast and on full alert for rocky outcrops. We’re charting the coastline as we progress.

Syd Kirkby has been up on the bridge at 4 am most mornings, beside Phil Law, watching the radar for bergs and rocks in the heavy snow, and taking running fixes from the ship and doing coastline plotting.

There is quite a swell and the ship is rough, so some of the travellers are feeling a bit seedy.

The Kista is covered with a heavy layer of snow and every shroud and stay is covered with icicles, in the sheltered spots up to four feet long. The icicles make a low sad hum as we steam onwards through the pack ice.

Early this morning we received a radio message from the Russians. They’ve offered to fly over and drop a map of the ice conditions but Phil said it wasn’t necessary. They are in Australian Territory and we probably have to be careful about what we accept from them by way of help. We don’t want to assist them in having their presence legitimised.