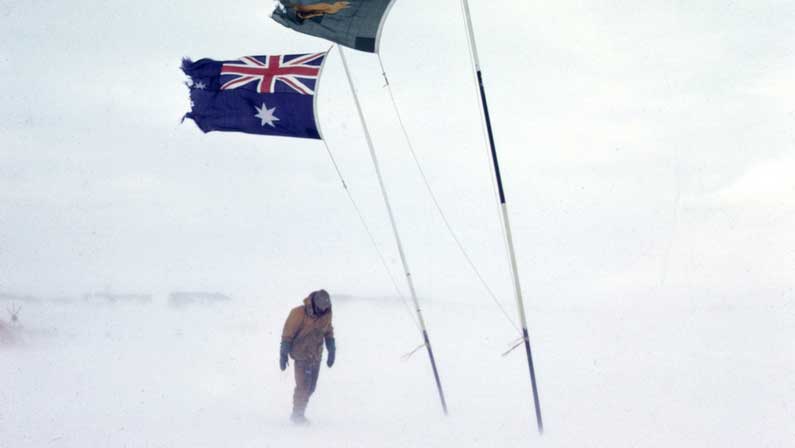 We have been lying here gazing back at the men of old. They stand like beacons to show us the way, to give us inspiration and patience and hope. I find myself wondering if I am worthy to carry the frayed banner they have passed to us. Theirs is the past, ours is the future, how will we show in a hundred—or even fifty or twenty years—one thing is sure those giants of old shall never be eclipsed.

The expeditioners left with the sun in their faces. Some were walking; others were driving the languorous weasels as they headed towards the steep ascent onto the plateau. The dogs’ plume tails waved like cheerleaders’ pompoms, and the curling white wisps of their breath danced ahead like spectral apparitions. The whole party was excited—this was the major endeavour of their year in Antarctica. The ebullient surveyor had irritated and charmed, been a moody bugger and a cheerful brat; he had been respectfully awestruck and disrespectfully rude, but he was their uncouth youth. He was diligent, talented, and committed, and this was Australia’s most important expedition since Mawson Station was established.

Their destination was the Prince Charles Mountains (now the Northern Prince Charles Mountains), first sighted and photographed by the US Air Force during Operation Highjump in 1947. In 1954, Bob Dovers almost became the first man to reach the range overland. He gazed across a physical divide of treacherous crevassing at the pavilions of soaring peaks, observed an astrofix, and turned back at Peak 7, leaving Weasel Three to become a poignant ellipsis in the ice.