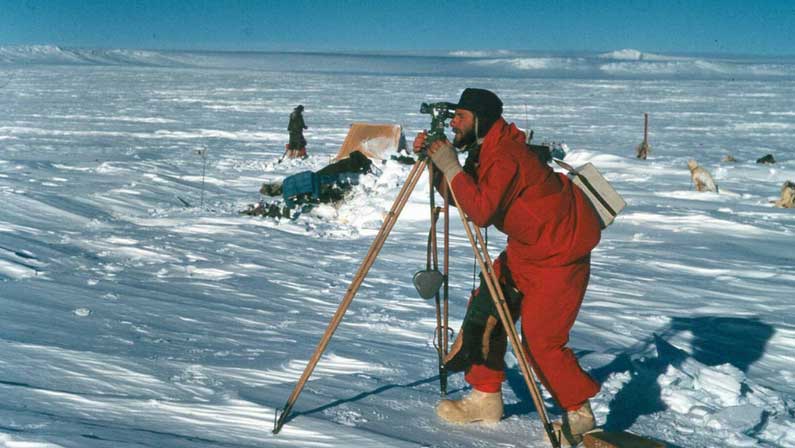 Previously: In the middle of August, Mawson’s OiC (Officer in charge) gave Syd permission to do another short reconnaissance trip out onto sea ice, this time heading west.  Six men were going, this time taking two weasels.

They set off on Thursday 9th August, 1956, and we didn’t hear from Syd again, until Saturday, three days into the journey. He sounded happy enough, but this was sea level surveying. He was to head onto the plateau and up many mountains to carry out his surveying work in Antarctica, but even here, on the sea ice, the problem of frozen equipment and batteries was substantial and slowed his work while he stood in the below freezing winds.

On Saturday we got away by about ten (in the morning) and set sail happily. All went well till we got about twenty miles up and then our troubles started.

We could see … ahead of us … a terrible jumble of pressure ice. .. Decided it was better to push on rather than turn back so we crept gingerly into the midst of it.

It was heart-breaking and weasel-wrecking progress though we were slowly getting nearer to a firm camp. We had a nerve-wracking mile or so while we crept along an open pressure crack as it was the only travellable route.

However dark saw us on the island and getting a brew going so life did not appear too bad despite the rapidly dropping temperature.

By night though, I would have told a very different story.

The temperature had dropped to -67°f   [-55° c]   so work was not a very happy business. I have reduced the observations and they look really nice, I don’t quite know what to do about this business, the results are good but I have to crucify myself to get them.

I had a good deal of strife with the jigger {theodolite] and lighting; one theodolite freezing solid and refusing to move at all. However the other, despite being very stiff, behaved well.

I eventually defeated the cold killing the batteries by getting two lengths of the aerial wire and making long leads so that the batteries could stay in the weasel where they had a cooker going. In bed by twelve and poured a hot milk and honey into myself plus a couple of Ronicobs and slept like a log.