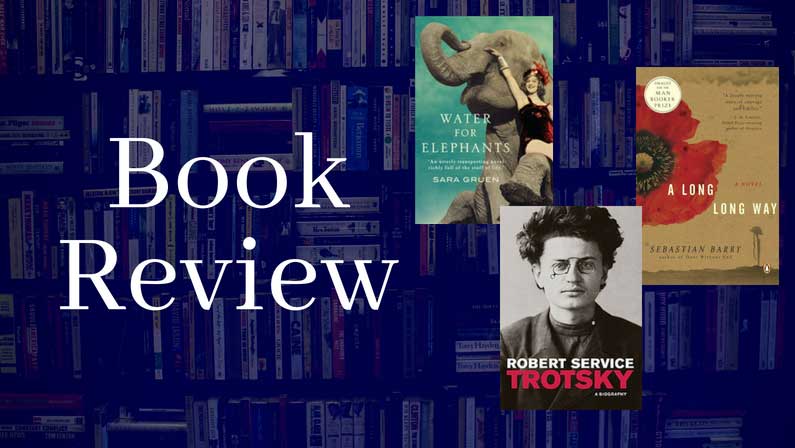 You’ll all be looking for books to read over the holidays so don’t forget to pop into my book reviews, listed in Recommended reading. All these books are in the local library (well, they will be when I return them) and they are all wonderful. Happy Reading.

It’s a love story set in the Great Depression, but the passion between college boy Jacob (played by Robert Pattinson in the 2011 movie of the book) and Marlena (Reese Witherspoon), takes place amongst a cast of dwarves, fat ladies, clowns and roustabouts who bring Benzini Brothers Circus to country America. The setting, the animals, the history of this sub-strata world aboard a privately owned circus train are completely enthralling. Reviewers are calling it a big-hearted novel and the heart which beats the hardest belongs to Rosie, an elephant who is both mistreated and adored.

Willie Dunne leaves Dublin in 1914 to fight for the King. Barry’s writing style is redolent of Ella Fitzgerald’s singing — the poetry in his prose bounces the story along in the same matter-of-fact style and somehow, huge horrible themes sweep past us and we are never permitted to wallow. The political tension which festers back in Willie’s hometown, the detailed description of the Irish troops’ exposure to mustard gas, the awful treachery which leads to Willie losing his beloved Gretta, stay long after the novel is finished. I don’t think anyone writes better than Sebastian Barry.

I was a bit surprised when I finished reading Service’s well written and superbly researched biography at how much I didn’t know about this major twentieth-century intellectual. I really only knew the history of Trotsky, the communist and Bolshevik but, after he fled the Soviet Union, he became an internationally renowned and admired public intellectual. His commentary was published in newspapers throughout the world. That’s who he was when he was murdered by Stalin’s hitman in Mexico and that’s why news of his death dominated the world press for a very long time. This is a powerful, moving and engrossing biography of a massively influential man.