Bethnal Green – A Rural Hamlet on the Edge of a City 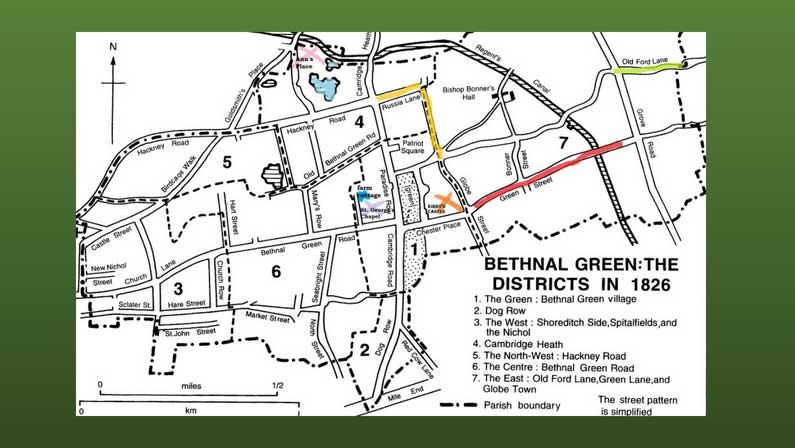 The story of the Finches has just irrevocably changed from the country to the city although they don’t really know it yet. William Finch, born in January 1713, has moved to Bethnal Green. I’m not sure but I think he took up lodgings with William and Mary Ansell in Brick Lane. He married their daughter Mary.

Bethnal Green was a pretty little hamlet composed of strip fields of pastures and crops.

The lovely lilt of the name comes from the Anglo-Saxon Blithehale or Blythenhale. Together Healh (meaning angle or conern) and blithe (which means happy) created an appellation that translates as Happy Corner. Originally Bethnal Green was bordered by marshland and Bishopswood Forest, remnants of which survived in the east until the sixteenth century. 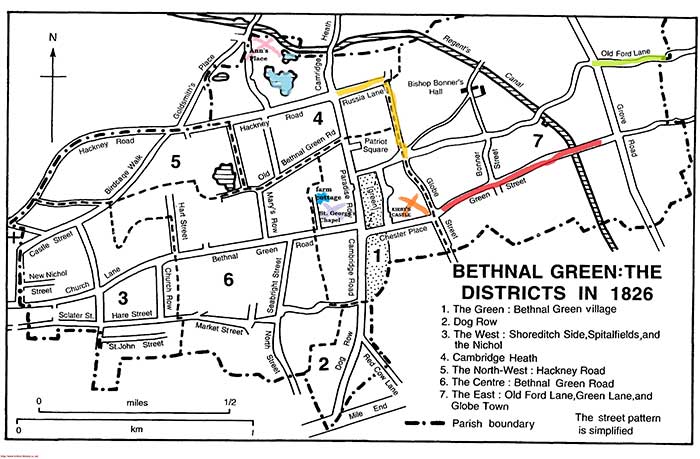 A natural spring, St. Winifred’s Well, was at the northern end.

For centuries, the agrarian hamlet, part of the ancient parish of Stepney in Middlesex, was home to generations of peasants who worked their strip plots, paid their land taxes to the landlord, laboured on the manor estate and brought up large families of church-going agricultural labourers who would rarely travel to the neighbouring villages.

Bethnal Green grew the food for the nearby megapolis, the giant city of London just to the west. Until the early nineteenth century, London was one of just six major cities in the world.

Even when young William Finch moved to Bethnal Green in 1738, Bethnal Green was rural. The lane they would soon move into, Ann’s Lane, looked a lot like this.

Market gardening and light industry, such as shoe and clothing manufacturing had already moved into the hamlet by the time William arrived.

William sought work with one of the peasant farmers on one of the strip lots … they are distinctive only because of the shape. Long narrow blocks of land often more associated with German farming than British, they were traditional in this area and they often differed from other farms because the farmers did not live on them. They walked from their homes in the village to their blocks nearby and so on any day in 1738 we could have passed William Finch on foot, walking on a country lane to go to work tending cattle or other stock, or helping with the crops.

The Finches are going to stay in this hamlet for the next 120 years so the next few posts will be about Ann’s Lane, as it went from the country lane to a squalid urban slum. Eventually, even that description was too generous and it was declared a health risk and all the old cottages, and the lane itself was destroyed and removed from all maps.