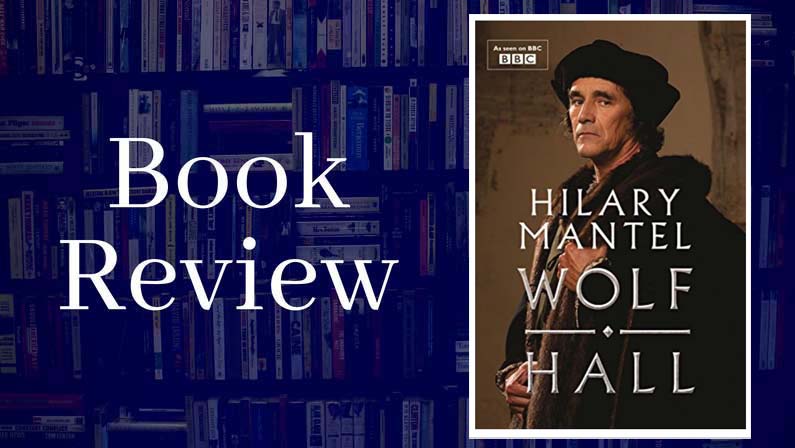 I missed the Wolf Hall phenomenon—the book, the Booker Prizes, the play, even the television series although I’ve bought it now and mean to watch it soon. Wolf Hall is book one of a series, published in 2009 and took out the Man Booker Prize that year. The second book Bring Up the Bodies, scooped up that same prize in 2012. I’d hear podcasts of Hilary Mantel as I drove to work and think she sounded confident, learned, clever and impressive but along the way, I must have formed the impression that she’d be an author who displays her cleverness at the expense of the story.

I must have also formed the equally inaccurate impression that she’d be enchanted with the long languid sentences of Regency novels, addicted to adjectives and body odour because, all these years later when I finally decided to read the books, her brutal, punkish fragmented sentences caught me completely off guard.

Wolf Hall opens with a boy being kicked to death by his father. Told in the point of view of the boy (who doesn’t expect to survive this bashing) we are somehow privy to the thoughts of the assailant as well because the boy has the same killer instinct. The boy has already established his own reputation as someone other children fear, as someone who just might kill one day. If he survives his father.

It might be the most surprising book I’ve ever read.

It’s a fictional biography of Thomas Cromwell, lawyer to the Archbishop of York when Henry VIII was desperate to have his marriage to Katherine of Aragon annulled so he could marry Anne Boleyn. The Archbishop, Thomas Wolsey has failed to convince Pope Clement to give Henry his annulment and that places Wolsey in an impossible position. Henry Tudor will have his way and the Archbishop simply cannot step aside. Naturally, the King banishes him.  The Archbishop’s lawyer is Thomas Cromwell, who ensures that the great man’s demise runs at a very slow clip with the greatest dignity possible, holding back a howling chorus who believe that throwing rocks at Wolsey’s back will impress the Henry. It’s costly for Cromwell to be the Archbishop’s lawyer but he is loyal and brave, and something else.

That’s the noun that several of his detractors arrive at, as they struggle to express why he enrages them so. He’s a solid wall of unmanageable integrity. He’s a blacksmith’s son, a former soldier, probably a killer and he saw a lot of the world after he fled his father’s boots. By about a quarter of the way through Wolf Hall, Cromwell is reasonably sure that the most likely outcome will be his own death. But he will not run, he will not blink, he won’t be distracted or sidelined.

The opening chapter is a subtle metaphor for the boy’s life. It’s not that the boy doesn’t have the strength to get up and out of the way of his father’s boots. He doesn’t. But even if he did, there’s steel in him that forbids flight. He’s not allowed to fight his father, wouldn’t win if he did, but he won’t run either. The boy survived the brutal father, but this is history and we know he won’t survive the court of Henry Tudor, although this is book one of a series and besides, it’s a story of journeys, not destinations.

Hilary Mantel understands political intrigue and strategic manoeuvring. Her protagonist knows that the cowardly will tuck in behind the strong, just as he recognises that bullies despise and discard toadies. Mantel takes her insight into a world where there are more gaps in the documentation than facts. She fills in the gaps with detail that is believable and understandable and sad.

I’d like to say it clips along at a riveting pace but honestly, sometimes I was bored. Cromwell has a lot of waiting to do and sometimes the sitting around in the shadows made me wonder if I might not have something better to do too.

Wolf Hall is told completely in the point of view of Cromwell. It is often difficult to discern who is speaking because everyone is ‘he’. Women rarely speak. If there’s a flaw in the style it’s that decision, all those damned confusing ‘he’s; it’s not only disorienting, it hums a bit with pretension.

There is an underlying moral that the world is a better place because people like Cromwell exist. I’d say the same thing about this author. Really, we are enriched by writers who master their craft so well and who produce works of such outstanding skill.