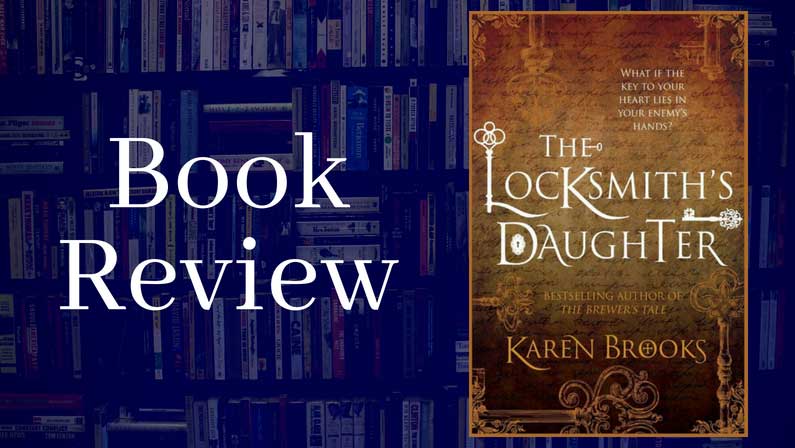 This is the second of Karen Brooks’ mega-sized historical romances but her tenth published work of fiction. As with The Brewer’s Tale, research is her forte.

Brooks is a writer who brings her streetscapes to bustling, stinking, frantic and slippery life. In Elizabethan England, we walk in narrow alleys and in wide streets and, all the while, animals and crowds and washing and people pouring out of small spaces move with us. Just here is food left to rot. Brushing and shoving past us are the reeking, unwashed and underfed poor people of this huge city.

Along with her skills at creating her settings, Brooks has perfected the dark art of manipulating emotions and making us care about her characters.

However, I have a slight conflict of interest. Possibly two. I’m only going to confess to one.

The main protagonist of this novel, Mallory Bright is a young woman who has been trained to perfection as a locksmith by her father, but when it becomes necessary for her to leave his house, it is to the home of Sir Francis Walsingham that she is sent.

Here is my conflict.

Mallory, for many chapters, deeply admires and is fiercely loyal to this dark, spymaster and fanatical protector of Queen Elizabeth. But who was he?

I don’t want to overstate my case but he was the piece of Protestant trash who tortured my favourite ancestor to death. That’s who he was.

My ancestor, Thomas Belson was a wonderful brave young man. He was a Catholic Martyr. You can google him. He was beatified in 1984 and became a saint. Rightly so!

A son of a wealthy Catholic family in Buckinghamshire, born in the mid-1560s, he went to Oxford, part of Oriel College and then off to the Catholic seminary in Reims. In his early twenties, despite the extraordinary risk, he returned to England where he was caught and arrested and imprisoned. He was released. Maybe his family’s wealth produced the connections to save his life but he didn’t leave the country. He headed back to Buckinghamshire to help his friends, one of whom was a priest and there he was found, hiding in a priest hole (obviously not a very effective one) and this time Mallory Bright’s kindly employer stepped in and personally tortured him for weeks, until he was executed.

So, don’t you tell me that grim, streak of misery was a good thing, Mallory Bright!

Okay, I’ve got that out of my system. Possibly.

Mallory’s eyes are opened to the honourable gent and the story turns and she goes from being a master spy to an imprisoned traitor and, all the while, her gigantic-framed, enchanting (and Scarlet Pimpernel-like) suitor – did I mention he’s Catholic? – Lord Nathaniel walks close by, often in her shadow.

Historical romance is not my favourite genre but stories written by authors who can yank my emotions like Karen Brooks can, are my favourite books to read. I think it’s a bit patchy. I think it’s a bit long. But if you look on Good Reads, you’ll see that I’m in a minority who have any criticisms at all. It is holding hundreds and hundreds of reviewers in thrall, so go ahead, let your emotions be tugged, engage with the spy and locksmith, Mallory in her dangerous world.