Fixing Antarctica: Euphoria Amidst the Gloom 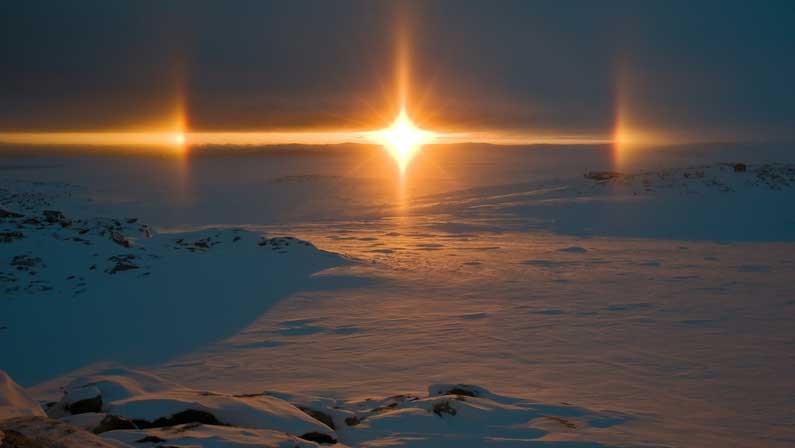 August is a difficult month for expeditioners in Antarctica. The long dark winter has created a deep lethargy but the first rays of sun appear over the horizon, and the mood swings each day are quite observable in the diaries. As Syd pushed ahead with plans for The Southern Journey into the unexplored country behind the Prince Charles Mountains, lethargy and depression amongst the winterers affected everyone.  For inspiration, Syd Kirkby was reading the books of the men he hoped to emulate. It worked, except that one day he was as enthusiastic as one of the new pups and the next he was down in the depths of gloom:

Straight from the diary:

Summer is returning rapidly, the sun is now above the horizon for about five hours a day and for another two or so we have that beautiful Antarctic dawn and twilight. It is odd that nothing has ever been written about the beauty of the scenery, it is hard and cold but the grandness of the scale and the utter virginity of it gives it an appeal that no pretty, pretty scenery can rival. All the personal diaries of past men speak of it yet it is never printed. Probably it would not sell, what goes down best ands becomes the Antarctic are the misfortunes, Scott, Shackelton, Ninnis, Mertz, Hoseason, Forbes, Taylor, Jelbart. Even Amundsen, the greatest ever, except maybe Shackelton is not read because he did not perish and was a success. That is the 0330 auroral obs done, outside it is beautiful, clear and calm with no moon so that the sky is a glossy black with the artificial looking stars pasted onto it and cold which makes one gasp as soon as he steps out and instantly clears a sleepy stuffy head. Oh hell, I’m off again, if anyone ever reads this diary they will swear I am bush happy.

The next day he was in deep despair:

We are having a bit of bother finalising the party for the southern journey. There are only two who will be really free at the time and unfortunately they are not really suitable. I would just as soon have only the basic three along but the decree says it must be six. I feel that with the three of us and three weasels we are completely self contained and could extend our range considerably, also we each have a job to do and are professionals rather than amateurs. By that I do not mean that amateurs are no good but where conditions are a little uncomfortable for an extended time the professional has a background and an aim, both very powerful spurs, and God knows we will need spurs after two or three months of it. My trouble is that I am so keen to do a solid job that I would not be happy short of a party of Peters.