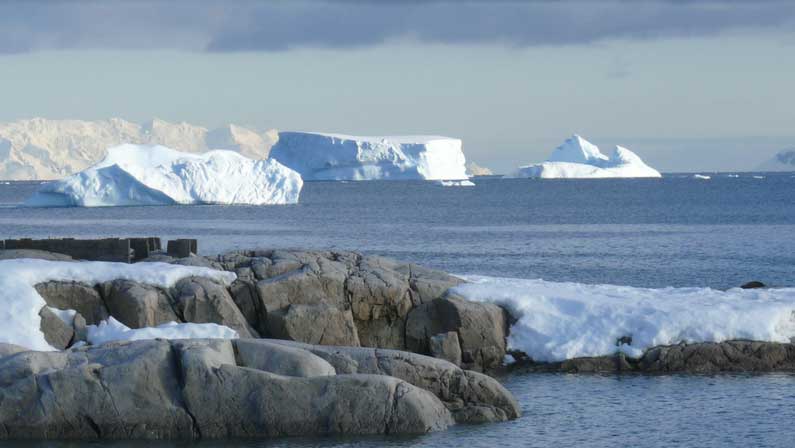 The Captain, Hans Christian Petersen has been roaring for days, at anyone foolish enough to be spotted by him. By Wednesday 15 February we were in the grip of a mighty blizzard. Just sixty miles out from Mawson and the ship was hurled around on the icy sea, bobbing like a cork with the contents of our cabins showering down on us. It’s during conditions like this that the skipper earns his keep but my goodness; no-one could accuse Hans Christian of being a pleasant-tempered soul. Fortunately, Phil Law is as sick as a dog so he had kept out of the skipper’s way because the clash of egos between the two of them doesn’t make for happy company.

We had two days of it, with the ship lurching every which way and most of the crew and passengers confined to their bunks, and then suddenly, at five am on Friday morning, 17 February 1956, we had the call to come up to the bridge.

There was the rising dark bulk of the Henderson, Masson, David and Casey mountains, soaring up in a white landscape. The cliff face behind Mawson is steep and then the plateau is flat and glistening and it gives the impression that the mountains are suspended in the air. Right in front of us is our little camp, our home for the next fifteen months: Mawson station, set below the plateau on a sloping rock horseshoe.

It took the skipper six hours to get into the harbour and drop anchor but by mid-day, we were ashore meeting last year’s winterers.

Now we have to unload the Kista using the amphibious D.W.K.S (ducks). We’ve got maybe ten days to do it before the skipper will be taking the Kista out of the ice. We got two loads off the ship that afternoon and then the next day, a beautiful sunny Saturday, we put in eighteen solid hours, working like the hammers of hell all day unloading and we have made a noticeable dent in the cargo.

The surveyor Syd Kirkby has appointed himself secretary of the Antarctic Swimming Club, drawing the certificates for everyone who landed in the harbour. Six intrepid members so far, the funniest being John Hollingshead, who actually managed to give an almighty heave on a load of timber and catapult himself up through the air, over the side and into the icy water. The timber load didn’t move an inch but John was as graceful as an Olympic diver.

It was all hands on deck all Sunday (19 February). We stopped only to take a couple of photographs of some seals who came to visit.

We will have to get a move on, the bay is starting to freeze over from the edges and the water is rolling in slow oily waves.