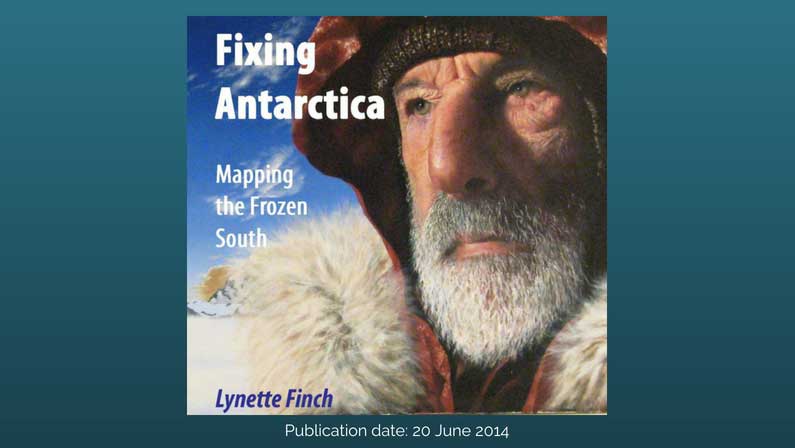 Still out in the field, this first trip over the plateau lasted from Tuesday 27 March 1956 to Wednesday 4th April. Syd and Bill Bewsher (who was a much more experienced climber) climbed a mountain to get another astrofix. An astrofix is The Fix referred to in the title of Syd’s biography Fixing Antarctica and it might be time to try to explain what it is …

An astrofix “locks” a local feature (say a mountain) in place so that everyone can see where it is with reference to the stars. With an astrofix it begins to be possible to create an accurate map because it allows the “fixed” features to be plotted on the worldwide grid of latitude and longitude.

Before you can make an accurate map, someone has to create the grid upon which the observations will be tied. The first grid of unmapped country is called a ground control. Its coordinates match the real location of features in the landscape. It is not an empty grid because each crossed line on the ground control is one step in the process of filling a map.

Each astrofix allows an area to be fixed on the grid.

During the exploration of Antarctica, Syd was trying to get an astrofix as close as possible to each degree of latitude and the equivalent distance apart in longitude along the coasts and inland. So he had to be somewhere high to take one …. like up a mountain for example.

Maybe by now you’re regretting that you started reading this, but perhaps I can explain WHAT a big deal an astrofix is if I tell you that in most places of the world, the surveyor required three or four hours to observe just one astrofix but in Antarctica the surveyor and the note taker (the booker) had to climb a mountain (let’s allocate six hours to that) and then try to keep still (in the gales at the top of the mountain) and try to keep their own shivering down to a moderate palsy so they didn’t bump the equipment into a feverish wobble, and then after a few hours they might have a fix. That was in winter. In summer the sun was above the horizon for 24 hours, so only the brightest stars were visible for observation.

After a few more hours of computation, a good outcome would be a fix accurate to about twenty metres. Since 2003, by contrast, it has been possible for positions determined by GPS to be accurate to a subcentimetre.

Syd Kirkby went to Antarctica to observe astrofixes and that year he completed eighteen. From Lewis Island in the east to Amundsen Bay in the west, almost 5,000 kilometres of crevassed icy terrain lay between them.