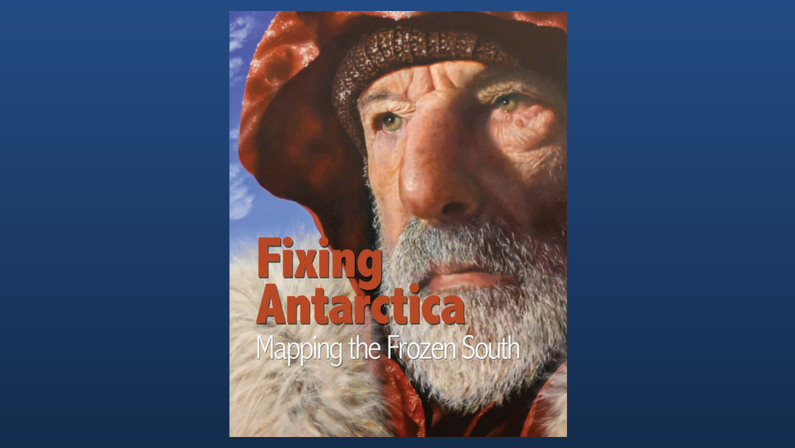 Yesterday, Sydney Kirkby was honoured with an Order of Australia medal

In 1955, Syd was selected as party surveyor of the 1956 ANARE research in Antarctica. He was twenty-two years old. At that time 85% of the continent had never been seen. Most of the 42% of the vast frozen continent claimed by Australia, was completely unknown. No-one knew if it was one landmass under the ice or many; most of the mountains had never been sighted, and the coastline was almost entirely uncharted. In 1955, there was no accurate map of Antarctica.

Syd surveyed so much of Antarctica that he is the single most important figure in the production of the map of the vast continent.

His easternmost exploration lies outside of Australian Antarctic Territory in Queen Maud Land, near Cape North where the Kirkby Glacier disgorges. Exploration and mapping took him to a western point (also beyond the Australian sector) in Victoria Land. Over 4,830 kilometres of coastline snake between them. That’s a big coastline for one surveyor to explore and map. Add the extra dimensions: that he also explored the interior of the continent; he was the major force in exploration and accurate topographical mapping of an area of 5,896,500 square kilometres, and you begin to get the sense of the scale of this man’s achievements.

You could drop eight and a half states the size of Texas into Australian Antarctica.

The map of Antarctica

A genuinely accurate map of Antarctica, with no unexplored spaces, was published for the first time in 1970, with most of the information supplied during the years from 1954 – 1962, but particularly in 1956 and 1957. The majority of the astrofixes which made it possible to map the inland were Syd’s astrofixes. An astrofix ‘locks’ a local feature in place so that everyone can see where it is with reference to the stars. With an astrofix begins the possibility of creating an accurate map over any extensive area because it allows the ‘fixed’ features to be plotted on the worldwide grid of latitude and longitude.

Up a mountain with a frozen theodolite

In most places of the world, the surveyor and the booker (who recorded the numbers as the surveyor peered through a theodolite) required three or four hours to observe an astrofix. In Antarctica, ‘fixing’ was slowed down as the gales at the top of the mountain and the surveyor’s own compulsive shivering bumped the equipment into a permanent palsy. During the long summer, the sun was above the horizon for up to twenty-four hours a day, so only the very brightest stars were visible for observation. Sometimes this meant that the surveyor had to use a much less accurate technique of observing the sun for a minimum of six hours to obtain satisfactory geometry of the fix. Antarctic astrofixes required a considerable investment of time and toughness.

Mapping is a matter of astrofixes

Before 1956, the number of astrofixes taken in Antarctica could be counted on the fingers of two hands. Douglas Mawson’s expeditions in the 1910s, 1920s, and 1930s contributed two astrofixes to international mapping, one on Possession Island and another in 1931 at Scullin Monolith in MacRobertson Land. Between August 1946 – February 1947 the United States Navy launched Operation Highjump, using icebreakers and helicopter, 33 aircraft, 13 ships, 10 caterpillar tractors and 4,700 personal, and contributed another three astrofixes to Antarctic mapping.

In Syd Kirkby’s first expedition, in 1956-7, using three or four men teams who relied heavily on dogs, Syd Kirkby completed eighteen astrofixes. From Lewis Island in the east to Amundsen Bay in the west, almost 5,000 kilometres of crevassed icy terrain lay between them.

Between 1956 to 1966, eleven other nations worked together to map the 58% of Antarctica not claimed by Australia while ANARE mapped the 42% claimed by Australia, mapping the vast inland and the coastline. So much of the ANARE surveying and mapping is attributed to Sydney Kirkby that he also has the claim to having mapped more unknown regions of the world than any other person in history.

Syd continues to lecture to community groups and schools, to museums and libraries. He is still active in promoting the ANARE club. When Hale School in Perth honoured Syd with a play about his life, Dancing with a Dream, which was presented on September 23, 2014 – September 25, 2014, Syd appeared on stage with the young actors.

You can read a lot more about Syd’s inspirational life in Fixing Antarctica.