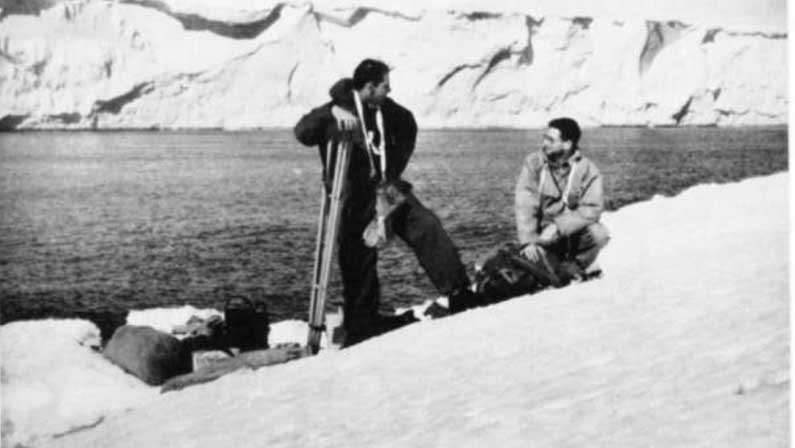 Heatwave! The temperature has soared to 35°F (which is 1°C.) and everyone is complaining about how hot it is! We must have already acclimatised to Antarctica because we’re having trouble sleeping.

We’re on the move again, heading westwards. This morning the skipper dropped anchor off a little island and Syd went ashore with Peter McGregor, the geophysicist. Lewis Islet is a bare rock outcrop with ice cliffs and we could all see Peter and Syd, with their heavy packs laden with of surveyors equipment, climbing to the top.

Last night some of us were out watching the ship gliding and crunching through the heavily piled ice and I got a chance to ask Syd what his job is. “Why do we need a surveyor in Antarctica?” I asked him. “There aren’t any accurate maps of Antarctica,” he said. Except for little bits of coastline, no-one knows anything about it. So today at Lewis, he is trying to get an astrofix to ‘lock’ the rock feature in place so that everyone can see where it is with reference to the stars. “With an astrofix begins the possibility of creating an accurate map over any extensive area because it allows the ‘fixed’ features to be plotted on the world-wide grid of latitude and longitude”.

This astrofix at Lewis Island will be Syd’s first Antarctic astrofix so he is excited. Syd’s astrofix will be added to a handful taken by earlier parties over a hundred years but he is hoping to add a dozen or so this year. International good practice in mapping requires an astrofixes at every degree of latitude and the equivalent distance apart in longitude, along the coasts and inland. In most places of the world, a surveyor (and the booker recording the numbers as the surveyor peers through a theodolite) required three or four hours to observe an astrofix but in Antarctica it will be slower.

Astrofixes are taken from the highest point of the landscape and in Antarctica, the gales at the top of a mountain and the surveyor’s shivering bumps the equipment. So it takes hours to obtain enough observations for a fix. It takes longer in summer because the sun is above the horizon for up to twenty-four hours a day, so only the brightest stars are visible for observation. Sometimes he will be forced to use a much less accurate technique of observing the sun for a minimum of six hours to obtain satisfactory geometry of the fix.

*Syd Kirkby went to Antarctica to observe astrofixes and, in his first expedition, he completed eighteen. From Lewis Island in the East to Amundsen Bay in the west, almost 5000 kilometres of crevassed icy terrain lie between them. 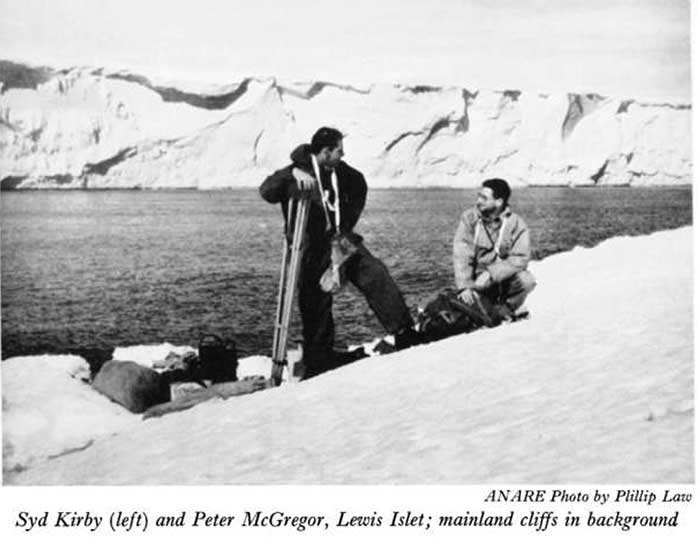