Fixing Antarctica: Weasels in the Mountains. 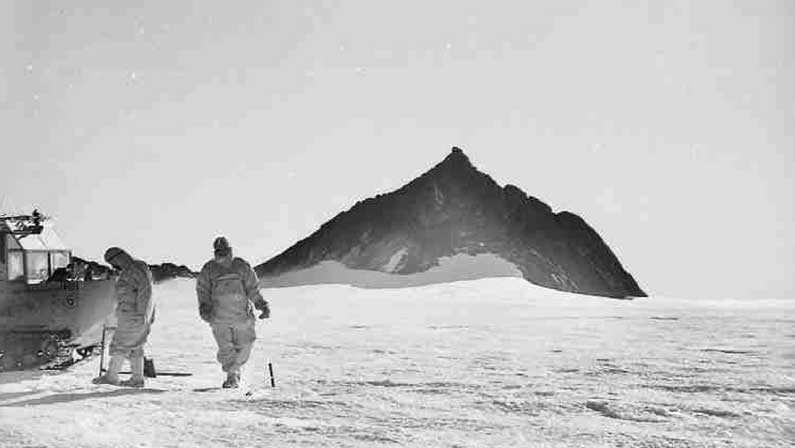 The harbour is finally frozen solid as a rock. By day excited expeditioners can be seen out on the smooth surface, playing football and skating. At night, you can still spot one of two of them out there, marvelling at the full moon and a shower of auroras in orange and pink and green.

What a paradise Antarctica is: “as clear as a bell and as cold as charity”, Syd wrote in his diary.

Our young surveyor is excited. He’s about to take his first field expedition up onto the Plateau. In the morning he will be heading out to the Henderson ranges.

That magnificent range of soaring peaks is clearly visible out the window of the accommodation huts at Mawson station.

Magical they are, because the plateau is white, the world is white, the horizon is invisible and the mountains look like they are suspended, hovering in mid-air.

Syd’s up packing for the trip and trying to keep his personal diary up to date as well. “It’s 1:20 in the morning”, he has written, as he works, “and we’ll be off in the morning”.

In preparation, he and Toby Cooper took the weasels and sleds over western arm and onto the ice, just for a test drive. The weasels are little American tracked, World War II mud and sand vehicles. They are having a hard time of it in Antarctica and Syd hasn’t developed any fondness for them. He’d rather use dogs all the time but there is a sense amongst the senior expeditioners and at ANARE in Melbourne too, that dog teams belong to some antediluvian past while the weasels are modern.

Already the surveyor suspects that the best thing about them is they are orange, so when they break down in the field you can find them again on the way home and know you are still on the right track. He never did revise that opinion and always had his best expeditions with the dog teams.

Time to get to bed Syd!

Well to sleep, in 5 ½ hours I shall be up and about again, as excited as a kid with the prospect of getting over this ridge and onto the Antarctic plateau.”