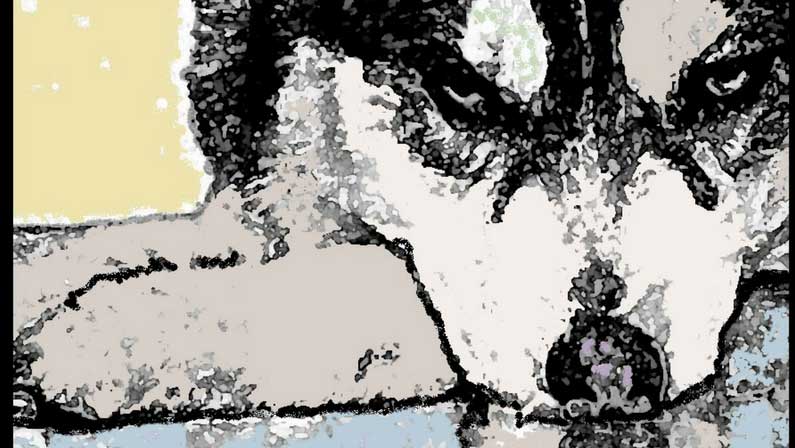 Previously on the dark sea ice: Their first expedition in the dark winter was a dangerous journey on the treacherous sea ice high way, to find a group of island that Douglas Mawson found in 1930. Dark omens snapped at their heels as they set out. They found the islands and turned for home. Camped at the top of the cliff, with the dogs below them, they heard the sea ice break. After trialling a new technique of getting the dogs to the top of the cliff, they eventually returned to their tent on the cliff face while the dogs ate beside them. …

At midday, the sun appeared, but the barometer plunged dramatically. A four-inch swell rocked the ice, and the tide crack grew wider.

Syd was confident that the full moon’s light was sufficient for navigation, and so they lowered the dogs down, one by one, and staked them on the shifting ice shoulder.

It was not easy to build an ice bridge across the six-feet-wide gap, but it was an even greater challenge to convince the huskies that this wasn’t another example of human treachery. Eventually, at three in the afternoon,  the three men and six dogs crossed the ice bridge and left the island.

They  “made good time for the first seventy minutes (six miles) but were then slowed by an increase in the wind.” There was still some light from the moon, and after two hours they had made ten miles.

They stopped for a block of chocolate and to rest the dogs. Nils was stiff; his feet were sore; and his face was frostbitten. He rode in the sledge for the next four and a half miles as they pressed onwards towards Welch Island in a steady fifty-knot wind directly into their faces. They arrived at Welch an hour later.

Calculating that they could cover the remaining six miles in the three hours it would have taken to pitch camp, they decided to push onwards to Mawson. “Fate had one more nudge in the ribs for us. About a mile past Welch we ran into heavy sastrugi.”

There were no records of high, ramped-up rolls of hard snow on sea ice, and yet they were confronted with: “stumbling, tumbling backside over breakfast sastrugi.” The dogs could hardly see over the high piles, and the exhausted men could barely keep on their feet, but they pushed themselves through hours of horrible effort to be rewarded the next day as they stumbled into Mawson, in serious need of reassurance of their sanity.