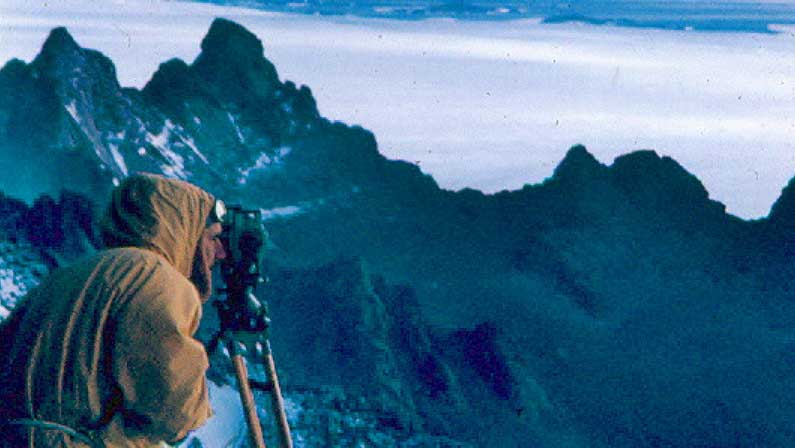 March – April 4, 1956.   Previously at Mawson Station. Syd Kirkby, Peter Crohn, Bill Bewsher and Toby Cooper went out on their first expedition on the plateau. Syd and Peter climbed a mountain and spent a chilly day taking observations and trying to get an astrofix. (Should have been number three for Syd but visibility was too poor). (What’s an astrofix?)

He climbed a mountain to take observations that weren’t good enough for an astrofix. Rolls off the keyboard, but here is what he wrote in his own diary about that mountain. It puts some perspective on the extraordinarily difficult job he had creating a map of Antarctica.

I’ll take you back to Friday March 30th, 1956, which was Good Friday. Syd was still only twenty-one years old remember. Out in the plateau they were sleeping in the weasles because the gales were so strong that it seemed the safest thing to do but even so the little sand vehicles rocked all night and the wind howled in the heavy snow fall. He got up in the morning and “just for for the self discipline I shall have a meatless day, had oatmeal for breakfast and for tea I shall have vegemite and biscuits and chocolate”.

Out the window they could see the mountain that the surveyor had to get up, carrying about 60 pounds (28 kg) of surveying equipment on his back. Bill tried to contact base but the radio couldn’t pick up a signal.

After breakfast Syd “Piled the jigger and survey camera into a rucksack and off we went.”

Syd, Bill and Peter climbed up 1000 feet and dropped the equipment, leaving it there so they could return the next day. The climb to the top was another 1000 feet but they broke it in two: day one get the equipment half way up, day two climb to the equipment and get it to the top. After the drop off, they went on to the top so they could see the climb that awaited them. Syd said “I have never been so clapped out in my life as when we got to the top” and Peter and Bill, who were veteran climbers of 25,000 foot mountains, said it was the most difficult climb they have done.

Syd was not an experienced climber and the second half of the mountain was an S in difficulty (the second hardest rating). In his sleeping bag that night he admitted:

I am quite honestly scared as all hell when I get onto a vertical pitch or into crack and start wedging up, while I climb I do not think, but before I go I imagine what gusts of wind could do or what would happen if I got stuck or got frost bitten hands or lost a mitt. Still I guess I will get used to it, maybe even blasé about the whole business.

The next day Bill and Syd made it to the top but the surveyor couldn’t get an astrofix. The wind was blowing at 40 knots and the drifting snow made visibility too poor. They made it back to base at eight o’clock that night and by then, Peter and Toby had already got themselves organised to come out looking for Bill and Syd. The two teams met each other outside in the drifting sleet.

The next year the mountain was called Rumdoodle Peak. This is the photograph Bill took of Syd trying to get his astrofix at the top. 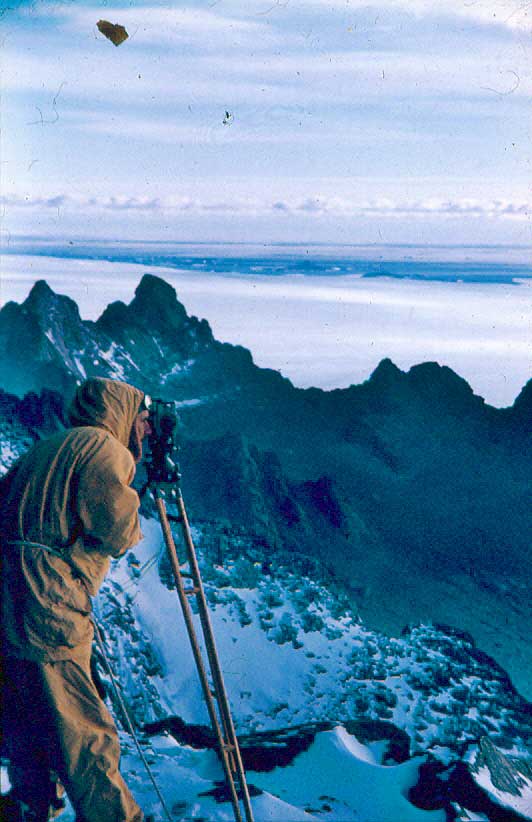